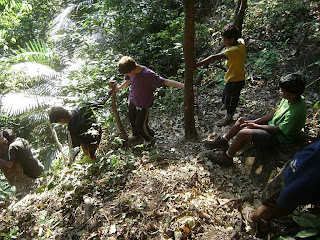 The deep voice of the conductor woke me up from my light sleep. It seemed to have done that to most of my friends too. The bus squeaked to a halt and all of us, more asleep than awake, hopped off onto a deserted road. There were a few low-roofed buildings scattered all over the place and there was the road cutting right through the small town. This place reminded me of a scene from a favourite movie of mine.

We must’ve looked really out-of-the-place, sleepy eyed, crumpled clothes, huge backpacks and all- the people there looked at us we’d dropped down from another planet.

The first thing my mind took in was ‘Its cold!’. I guess everyone else had their minds telling them the same for not one of them stood without their teeth chattering! We were huddled together, for warmth I guess when someone just said, “Is that Venus?!”. Now I must say, that really caught my attention, because I just loved stars and other heavenly bodies. We were so engrossed in our conversations, we didn’t notice a tall, broad-shouldered woman wearing full moon spectacles join us.

After we were done introducing ourselves, Nomito lead us into the nearest building for tea/coffee. Hot coffee in that cold weather…it was heavenly!

We wandered out of the tea shop only to find a red Maruti van waiting for us. Five others plus me loaded our bags, got into it and drove away. I couldn’t say not one of us wasn’t thrilled by our stay in this place. We were all talking about the flora and fauna of this place when suddenly our car stopped and we were asked to look out of the windows. You wouldn’t believe me if I told you this…but, ah, I couldn’t just not tell you! Standing on either side of the road were half a dozen Wild Indian Ghours!!! 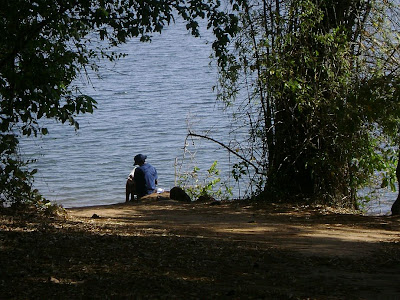 The warm cup of milk seemed like heaven on earth that cold, windy morning. Gulping down all of it, some of us got into the Omni that was to take us to our base camp. The drive to the reservoir was beautiful. Wild bison ran across on the long, winding road a few metres ahead of us. I fell in love with the reservoir the moment I saw it. A sea green haze stretched itself into a miniature ocean. We soon reached our base camp. It consisted of a kitchen and an amphitheatre like circle which was called “the Circle”. After that we went for a small walk to see the place. After a long time did I hear only the leaves brushing against themselves and the sounds of the water lapping and not the melancholy noise of the traffic bashing around in the streets of Bangalore. After that breakfast was served and then we sliced into the reservoir disrupting the calm blue waters. That was the best time of my life. We all got out of the water hoping the rest of the excursion would be as fun as the first day. 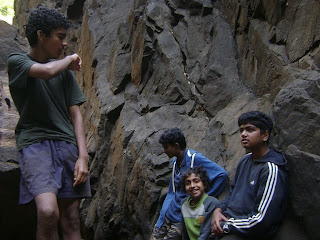 Early, in the morning, we woke up and quickly set off the fire. Then, after drinking halli horlicks, we headed back to the amphitheatre to pack up the tents. We then packed up to go on an expedition to Eduvani. I brought my bag to circle, and ate a breakfast of idli and sambar. We went off at about 11:00, and started heading up the hill. At the top we ate lunch, and came down the other side. Once we reached the tar road, we got lost for 2 hours. Finally, we found the horse path, after cutting my self from all the needles. Walking down the horse path, we finally ended up on a cliff looking down at the road. Climbing down slowly, we finally reached the road again. 1km away was Eduvani, where we drank water at a store after being dehydrated. We reached the house, and we made kitchidi. It got burnt and tasted horrible. 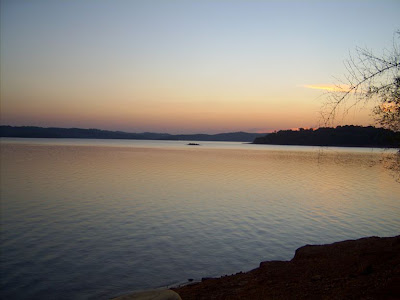 We tried to have quiet time everyday. Not as a rigid rule, but an attempt to create space for some quiet. Some days we would not all sit together for quiet time, some days we would sit together for a short time and some days longer. Mostly the quiet time coincided with sunset, and we would all sit on the shore facing the reservoir. It was nice to watch everyone take their spots, some wanting the view of the setting sun, some a warm rock to sit on, some a rock to lean on… in this space created to be alone and quiet… many things happened! Fidgety fingers found stones, twigs to play with, some of the children dozed off, some heads turned to follow every sound and some sat in silence. Every evening when we did sit quietly at the shore, we saw a group of cormorants fly close to the surface of the vast waters from east to west, we heard the loud buzz of food hunting bees. Once we did a session in the gap between sunset and before the dark set in, the vast waters ahead of us and the vast sky above studded with many many stars and the crescent moon. We once had a whole afternoon of being by one self. 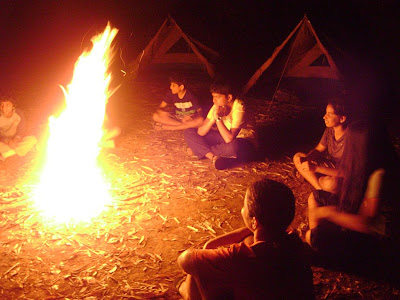 On the 8th day of our trek, I woke up in the morning to find that there was a Red-whiskered bulbul above me on a twig pecking at the berries on a tree. We all woke up rather early as we had to leave for the ‘group survival’ night that day and had prepared for it. It surely was the most exciting thing I had ever done in all my life and I was filled with such enthusiastic energy. Breakfast was also quite early that morning. After breakfast we were given time to pack for that night’s stay at an island not far away from the mainland and it was called peacock island.

Post Lunch we had this interesting activity- we had to shop for what we wanted to take for that night. Shopping was not the typical market shopping, we had to choose a set of things from a list for the night. This was pretty hard for we had to choose the things carefully to survive the night by ourselves. From the list of things we shopped, we luckily opted to get packed food instead of cooking our own meal. As soon as we were done with shopping, we set off paddling in the coracles towards that island. Paddling to that island was great fun, we sang and splashed water on each other and finally made it to the island. It was hilarious how a few of us who reached first were petrified by the thought that there were poachers in the island and they were making noises and even feared they would beat us up if they saw us. Some of us were convinced that there was no one on the island and we pushed aside all fears and finally walked to our campsite which was in the middle of the island.

As we put down our bags and removed our life jackets left it in a heap, I was enthralled by the place and the fact that we would all sleep there under the beautiful night sky. Most of us were off to find firewood to keep a fire going; enough to last for the whole night and the others were at the campsite pitching the tent. We found a huge tree lying on the ground which had either fallen off or had been cut for some reason. Breaking that huge tree into reasonably sized logs was a bit of a task but was entertaining and enjoyable! Some of us who had fetched the firewood went to wash our hands at the reservoir and found the packed food that we had ‘shopped’ for on the shore. We got the food up and put it aside for then. By the time we finished setting up the camp it was fairly dark. We then decided to start the fire. After the fire was going well, we started playing Uno around it. It wasn’t all that fun but still entertained us to an extent. We started singing songs, from classical to punk rock to heavy metal! We then had dinner and continued singing while some of us slept. After a while, I found everyone asleep while I gazed at the star studded night sky.

Sometime around 2.00 am in the night I found someone walking with a torch, I feared it could be the poachers who sensed the smoke from our fire and must have come to threaten us or perhaps take away our things. I watched the figure move slowly from right to left and then left to right, I wondered if I should wake up everyone and alert them.I woke up to see that it was a dream!

Few of us woke up at around 4 in the morning to start the fire again. Once we had got it back, we went right into out sleeping bags again as it was pretty cold out there in the morning.

Awakened by the birds calling and the langoors jumping from tree to tree, we put out the fire and packed up our sleeping bags. To brush our teeth, we went to the shore where we saw the adults who were keeping a watchful eye on us to ensure we were safe. They had spent the night on the other part of the island without us knowing and giving us the feeling we were alone. We then returned to our campsite, quickly rolled up the tents and then back in our coracles paddling away to the mainland for breakfast. 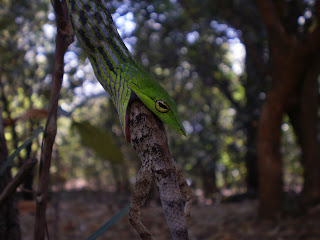 Just finished breakfast and sitting in front of the shore line of the Linganmakki reservoir there are 6 islands around me. The first day it was okay but the second day was not very enjoyble as I felt very home sick. But today I am fine we are going to a temple by a coracle.

The trip was fun! And I enjoyed it. 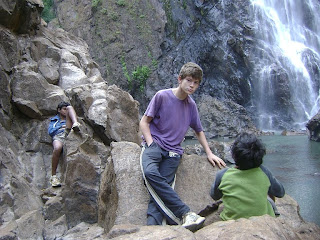 But I think the last excursion to Honnavar was better than this one. On this trip were some really good thing and really bad things. I really enjoyed the paddling bit, especially finding out the way to the temple with Sahana, Kailas, Ankith and Aditi.

I think one of the bad moments was when Sahana wasn’t feeling well. She didn’t finish the whole trip; her father came and picked her up in the middle. Dev also wasn’t there because he needed some medication and I really missed him because we usually have fun together.

And other things that I enjoyed were spending time with Sanjay and Yannick. We went for walks looking for birds and butterflies. On these walks we spotted many beautiful things. A challenging and exciting time which we had was the team survival activity.

Then many more things happened. I do not remember everything now. I love Honnemardu. It is one of the most beautiful places which I have ever seen in my life. 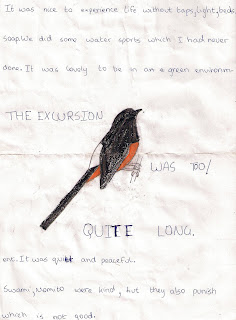 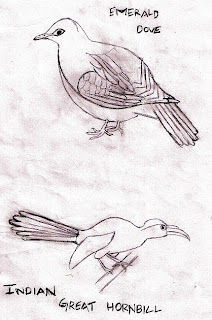 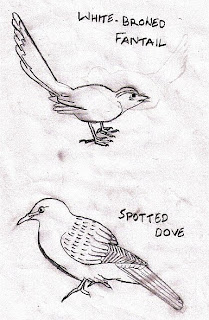