A Walk to Remember

by Shibumi
Last week the Ketaki’s (Age 7 to 9) went for a walk, the plan was to go mulberry picking in a gated community. Mulberries, we had heard were filled in the bushes and we were so excited to collect our wild edibles. We strolled into the lush green gated community to fill ourselves with delicious mulberry fruit. A couple of steps into our adventure, it started to drizzle, and then the rain got a bit heavy …we wished we had umbrellas with us… but nothing was going to stop us from reaching the mulberries.
As we giggled and fussed about the rain, we saw a man walking towards us with 6 to 8 umbrellas in his arms and one over his head. We started to whisper to ourselves ‘let’s ask that uncle for the umbrellas!’. He approached us, and as he passed a child, he reached out to give an umbrella to them! We were surprised, thrilled and felt magic in the air!
He was our monsoon Santa Clause!
(We learnt soon, that one of our parents who lived on the campus had sent her helper with the umbrellas, we felt thankful and cared for) 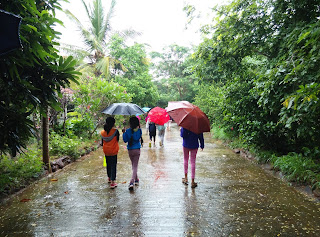 Armed with umbrellas, we walked to the mulberry bushes. We were delighted to see bushes bursting with Mulberries, deep red, black, white and purple. We decided not to attack the bushes completely and picked the ripe ones we could reach and let the ones we couldn’t reach for the birds(a bit reluctantly). 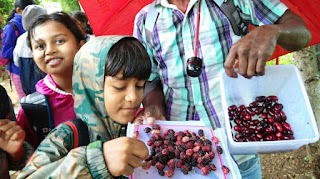 The mulberries we delicious!
Sarang (a parent of the Shibumi-the thought behind our umbrellas) then treated us to yummy snack in her house. Where we filled in our nature journals and some of us even painted with the mulberries we had collected. They have an amazing colour.
We reached Shibumi in time for lunch with our wild harvests of mulberries, jamuns and gooseberries.
After lunch some of the children with Roohi (a parent of Shibumi- who is the heart of our kitchen) made a super yummy mulberry jam and shared it with everybody! 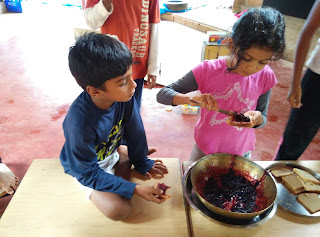 So much learning happened with the mind so awake and taste buds so pampered.
cooking, Education, New Curriculum, walks