A Missed Excursion, and a Gained Appreciation!

This is Viji & Kumaran (parents of Tejasvi & Srishti), and this is our roller-coaster experience over the last week.  Over the last few weeks the excitement level kept going up for Tejasvi, who was getting more excited and animated whenever she talked about her school excursion to Sahyadri.  She told her awe-stuck friends at home that she is going for one week [yes, ONE WEEK] to Sahyadri.  Sure, unlike her seven year old [kid] friends, she is SEVEN years old, and, yes, it is normal that she goes on week long trips.  Not that she knew where Sahyadri was, but she knew that it entailed a train ride with her class mates, and she knew that it meant no amma or appa to nag for a sometime.  Overall it sounded like a happy proposition…  Srishti was in a dilemma – the norm demanded that she follow the suit and insist that she goes as well; but she was not up to staying without amma and appa for any length of time (nagging or not), but more importantly, she was down with some viral infection that really made her want to stay at home.

Saturday came, and Tejasvi & the rest of us were struggling to stuff her teeny-weeny bag (actually, her school bag) with her dresses, sports cloths, apron, undergarments, shoe and socks, jacket, cap, notebook & pencil, toiletries, some medicine, water bottle and a sleeping bag, and still make the bag small enough to be carried easily.

Clearly a task that defied laws of nature…  Finally, we compromised by stuffing as much as possible in one bag, and the food, water and some essentials stuffed in an extra bag, which we could beg Sangeetha to manage somehow; we reasoned that this extra bag would be consumed by the end of the trip anyways. 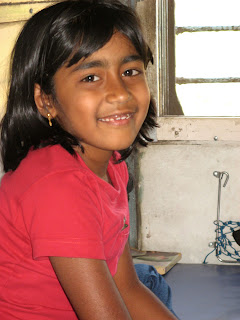 When we reached the train station, she was bubbling with joy.  All her friends were there and she was in her natural habitat now, generally monkeying around with her friends…  The train came, the kids were counted and settled in their seats, parents waved off, and we all finally heaved a sigh of relief.   We went back to a slightly emptier house, but were happy that Tejasvi would be having a good time… With a jetlag, I went to bed early, for a nice quite sleep with no need to read a bed-time story (actually, novels nowadays, running into chapters!).

I woke up to the telephone ring, and it was Sangeetha who informed us that Tejasvi is throwing up everything that she ate, and complaining severe headache! Our first reaction was a loud groan, as these were the symptoms that Srishti was having for nearly a week!  We had carefully kept the Tejasvi and Srishti apart, and till Saturday, Tejasvi was doing fine!  Sangeetha assured us that Tejasvi is sleeping now, and that they will take care of her well – in the train, and in Pune.  We lost our sleep anyways; sometimes, it is better to be in the scene suffering, than to be away wondering about things.  Next morning, we woke Sangeetha up around 7AM, and only to realize that they have not even reached Pune.  No change in Tejasvi’s condition, and we realized that the teachers were up attending to Tejasvi all night.  Sangeetha told us that they will go to Rajat’s grand-parent’s place first, and hopefully they can get something cooked for Tejasvi to eat.  Also, that will give some rest and respite to Tejasvi, as Sahyadri is 2-3 hours away from Pune still.  By 10AM, Roopa was on phone, asking for the condition Srishti is in, and requesting to speak to the doctor who treated Srishti about what could be the issue with Tejasvi; fortunately, it was Dr Tekur, who Roopa had known well, and over next couple of hours, she had worked out some plans for caring for Tejasvi when she reached Pune.  When the train reached Pune, Rajat’s grandparents were at the train station, to receive the students, and ready to manage Tejasvi.  At their home, she was given some mild food and juice (which she threw up promptly), and a nice clean bed to sleep in.  She c/would not eat and had splitting headache that required constant pressing.  We decided it is not wise for Tejasvi to go to Sahyadri (which is still 2 bus rides and a trek away) in her condition; she was to stay in Rajat’s grandparents place, with Angie.  The children left for Sahyadri, saying goodbye to Tejasvi.

I flew to Pune and reached Rajat’s grandparents place late in the evening, only to see Tejasvi in bed, Angie in attendance, and all paraphernalia needed to care for a sick child – bottles of medicine, water, fruits, towels and spittoon. Whenever Tejasvi woke up, it was usually to complain of splitting headache, and to throw up any food or medicine that was forced in.  She was unable to sit up by herself, and she needed her head to be pressed constantly.  I told Angie to sleep, saying that I would take care of Tejasvi for the night.  But, I must have dozed off with the jetlag and the lack of sleep the previous night, and when I woke up to Angie and Teajsvi’s talking, I realized that Angie was up a few times that night again attending to her!  This time I promised her that I would really take care of Tejasvi, and I did (with jeglag, I could not sleep after 3 AM anyways ;-).  Tejasvi’s condition improved, but not much; I know this, because she opted to go home, even when I offered to stay with her for couple of days in Pune, till she is strong enough to join her friends in Sahyadri!   So, that evening, I took her back to Bangalore (she slept in my arms pretty much through the journey).

After nearly 4-5 days, Tejasvi is doing fine now, though a bit weak still.  On the bright side, she looks forward to going to school the coming week.   But the whole episode reassured us many times over, the right choice we made for our children’s school, in Shibumi.  First, we were impressed with Roopa, Sangeetha and Angie, for handling the situation well, and having taken care of Tejasvi very well.  I am quite impressed with the mature reaction from Angie for handing a sick child.  Thanks to Meera and Sridhar, and, especially to Rajat’s grandparents who were kind, warm-hearted and very helpful!   Finally, to all the children in the excursion party, who helped to cheer up Tejasvi; but transitively that credit also goes to the Shibumi teachers & parents for having build a closely knit group of caring children. We were utterly grateful, and in some sense now realize in a very visceral way, the nurturing environment that our kids have to learn and to grow.

We are sure that the children had a good time in Pune (and Kodaikanal).  It is sad that Tejasvi missed a very enjoyable excursion, but I think she (and us) gained a much deeper appreciation for her friends, teachers and the school.

Note from Angie: Kumaran and Viji weren’t aware of it, but we also had a lot of help from Shalini’s aunt, Kalpana Aunty, who is a doctor. I called her two or three times the night on the train, at unearthly hours, when Tejasvi was throwing up all her medicine. She has been very concerned about Tejasvi, asking about her, worrying; and her advice helped us through that night.

Thanks, Angie/Shalini & Kalpana… Now that we realize there were more behind the scene activities than what we were aware of, it only makes the message stronger. Thanks, Shibumi Family.

“am quite impressed with the mature reaction from Angie” – Yes, these words truly describe the young, bright and confident teachers of shibumi. In most schools, we find teachers complain, tense, stressed and often in need of reassurance from the parents. These bright lots really deserve a thumbs up.

Yes, totally agree with Krithika. Sangeeta and Angie were amzingly responsible and patient with the kids. Without a frown or any sign of tiredness they were attending to Tejasvi’s needs as well as taking care of the remaining six enthusistic kids. I have only words of appreciation for them.
Vasantha (Rajat’s grandmother)