Real Education is when you explore inwards

Real Education is when you explore inwards

What makes their school different, says Kabir Jaithirtha (Director, Rajghat Besant School and Trustee, Krishnamurti Foundation, India), is the simple fact that children are treated with dignity and as individuals. 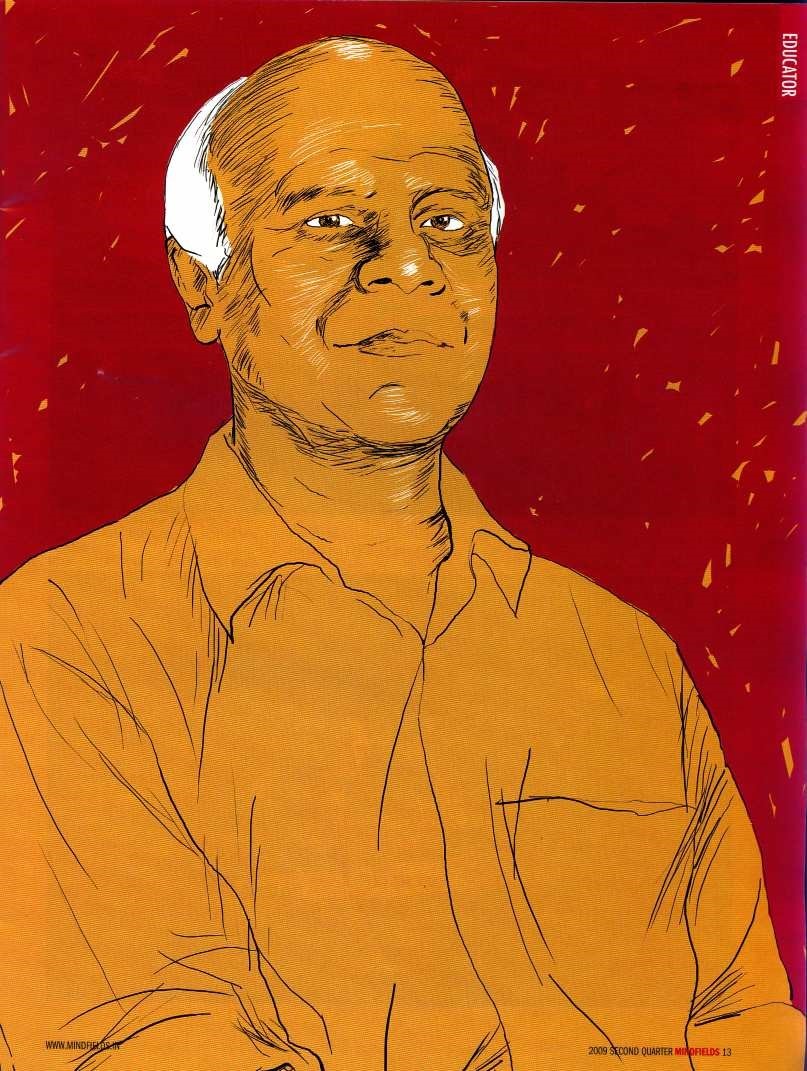 I first met Kabir Jaithirtha, Director of the Rajghat Besant School at a dhrupad concert in Varanasi. His wise demeanour and quiet manner embodied the character of a Krishnamurti-inspired educator. I later visited him at his one-room cottage set amid the peepal trees and grassy lawns of the beautiful Rajghat Besant School, on the banks of the Ganga. Over the course of my interview with him he moved from his desk chair to the floor and back as he sat and talked of his work. The austerity of his room reflected the simplicity and clarity of the thoughts he shared with me. I include here excerpts from our discussion:

TELL US ABOUT YOUR BACKGROUND

I was not such a great student. I was very young when I finished Class XI, called Senior Cambridge back then. For a long time, what they did at school did not make sense to me.

Besides, I was not such a student who would take up things and work on my own. But I used to read, dream and think a lot. I was a bit of a loner. I was a student at the Army School, Belgaum, where there was tremendous emphasis on sports. But I would be dreaming even on the football field!

I was 15 when I went to college. A couple of years later I wrote an exam for IIT and went to IIT, Bombay only to later drop out of the aeronautical engineering department. I had the disadvantage of being myopic, which meant I could not study for long hours.

I completed a Bachelor’s in Science but my father could not quite figure out a career for me. He suggested I go in for Chartered Accountancy. But I found that boring and instead wrote an exam for the I.I.M. Before I left for Calcutta, I had discovered and started to read J. Krishnamurti’s writings.

HOW DID YOUR ASSOCIATION WITH KRISHNAMURTI FOUNDATION BEGIN?

I read a post in the newspaper about a Krishnamurti school opening in Bangalore. This was in 1975. The school had not started yet. They were working on the building and landscaping. I started working for the Voluntary Health Association of India in New Delhi and worked with them for three years with an understanding that I would return to Bangalore once the school opened.

I returned to Bangalore in February 1978. When the school started there were 5 or 6 young people who worked as teachers and administrators. We were all deeply touched and inspired by Krishnamurti. There was a lot of space to learn and grow. I ended up teaching maths, English, geography and other subjects, as and what was required. The school did not have a principal so we formed a committee that took most decisions together. I was at the Valley School from 1978-90. Along the way, sometime in 1982-¬83, I became a trustee of the Krishnamurti Foundation.

TELL US ABOUT YOUR FIRST MEETING WITH KRISHNAMURTI

I was so ‘on fire’ and inspired by his writings, all of which I had read, that I decided to track him down. I traced him through common sense by looking through the phone directory for his close friends in Delhi. I was nervous to go alone, so I took a friend with me to the meeting that I imagined would not last more than ten minutes.

Krishnamurti kept us for an hour or so talking to us. During that meeting and some others that followed I used to shiver in his presence. A few years later the shivering stopped.

ABOUT YOUR CAREER AFTER THE VALLEY SCHOOL

I left the Valley School in 1990 owing to ideological differences on key issues, like the student-teacher ratio and the need for a smaller, interactive school, as based on the founder’s beliefs. The management felt that a small-school plan was not economically viable. I left the Valley School and so did some other members. We started Centre For Learning.

TELL US MORE ABOUT CENTRE FOR LEARNING

We started with 8 students, 3 of whom were children of the staff. There was clearly a hunger for such a school. Over the next three years the school’s strength increased to 60. We had 60 children with 10-12 adults around them. This was the basis for a good community.

We started at a friend’s place, then moved to a rented building and then to a mango orchard. Many creative moves came to our rescue. We had geodesic domes under mango trees and furniture was on wheels which meant that we could wheel out the library and push it back in the evening!

CFL grew from a day school to a school that experimented with boarding. Students aged five to eleven years would stay on the campus on Monday and Tuesday and be home on Wednesday, then return on Thursday and leave again on Friday.

This way many things could be done. What really helped us at CFL was a strong teacher body and our collective teaching experience.

At CFL our students appeared as private candidates for the Cambridge International Examinations and the curriculum was based on what students really wanted to learn. We found out that what they liked to learn and the variety of subjects they wanted to learn was far more than what regular schools offer.

We also came up with the Post-School programme after Class XII. The Post-School was started because a group of students came up and said that they needed some more time to explore and get ready for the outside world. Some of them also wanted degrees so they did degrees in economics, mathematics and literature but through distance education. One of our students liked outdoor activities and was exploring that option; he has now blossomed into a writer. Another wanted to be a designer. So the Post-School is where the students understand themselves and speak to people they trust.

The strongest component of the Post-School is the first exploratory year, which is also a starting point for a dialogue. The students go out on treks, volunteer, work with NGO’s and so on.

Some come back to the programme while others move on to different things. All students seem to have benefited from the programme. We start with students’ interests and then look around for resource people or organizations for them to follow.

WHAT DOES YOUR DAY LOOK LIKE HERE IN VARANASI?

My day depends on the school and the workings of the school. I start my day early and at 6.40 a.m. meet with teachers to discuss school, education and other issues. We have assembly at 8.00 in the morning and then move on to routine school work. These days we have a 40-minute “work” period at school where groups of students volunteer to clean up different parts of the school.

I am in the group that is responsible for library cleaning. The rest of the day is spent in administrative work and day to day school decisions. I teach maths and economics. At 4.30, I get back home and walk in the evenings. We sometimes have evening meetings. If not, I spend my time reading or sit quietly.

WHAT DO YOU ENJOY READING?

I like reading fiction but I am selective. I have enjoyed Amitav Ghosh’s writings a lot. I also read books on philosophy and history; I enjoy literature. I recently subscribed to The New York Review of Books. I also like poetry, music and architecture.

TELL US ABOUT YOUR INTEREST IN MUSIC

Music is of great importance to my life. I hesitate to sing for other people because of lack of riyaaz. I like listening to dhrupad mostly. My taste is quite different. I like Lalith Rao, Bahauddin Dagar, and Nikhil Banerjee

WHAT ARE. YOUR PLANS AFTER VARANASI?

After my three-year commitment is over, I would like to spend a year alone without being with anyone. I no longer see my life in terms of retirement. There is no division between my work and my life. They come together. I like to spend time with myself and see what comes out of that. I would like to explore in my own way whether the mind can become totally still.

WHAT CHANGES DO YOU SEE OVER THE PAST 30 YEARS IN THE FIELD OF EDUCATION?

I have not seen many changes in the education system. A lot of what people call education is simply shaping the mind of the child to conform to society; to fit a child into the economics of the society. I find this education such a danger to freedom and goodness because if the mind is shaped and conditioned, it cannot explore goodness.

The whole process of this education is to tame the energies because we feel untamed energy is disorderly. Education should really be nurturing the energy that is untamed. I believe real education is when you explore inwards. A mature mind is a mind that is able to explore inner and outer movement.

WHAT DO YOU THINK ABOUT TEACHERS?

Sadly, people come with a lot of qualifications to do teaching, but they do not have an understanding of their subjects. This shows how poor our education system is. There is not much dignity given to this profession. I find it more interesting to work with younger teachers than older ones. They are much more sensitive to education. It is a challenge to find committed teachers who are not only committed but understand and have sensitivity to the school. Surely, we have failed ourselves somewhere or else we would have produced more teachers from our own Krishnamurti schools.

HOW ARE THE WORDS OF KRISHNAMURTI RELEVANT TODAY?

Krishnamurti talks of things which are of significance whether you have lived in ancient India or the modern world. He talks about relationships, about the nature of relationships and what prevents us from relating to one another. I feel these ideas have enormous significance. We are conditioned to think we are separate from one another.

One can see how this feeling of separation is imposed on us on through identities of nation, caste or religion. This is a construct of the mind (thought). Small children do not have such identities based on ideology, group or religion. Even the sense of ‘I’ and ‘me’ is a conditioning of thought. Being separate and lonely becomes either attachment or deep dependence, which one is afraid to lose. So there is no freedom in this way of relating to each other. To actually relate there has to be no sense of separation in identity. Though we have lived with this separation for over 10.000 years it is worthwhile to see if this can be put to an end. This is the highest responsibility of a human being.

Shagufta Siddhi is an educator, cultural and heritage activist. Shagufta runs a cultural initiative, Ganga Jamuni, to promote cross cultural understanding among young adults. She owes her career as a teacher and interest in education to Kabir Jaithirtha who asked her to give ‘learning to be a teacher’ a go for 6 months.