by Shibumi
The pond at Shibumi has held everyone’s attention ever since it was built. It was a project taken up by some 12-13 year old children who worked at it with much enthusiasm.  It took some time and a mason’s help to finish the structure, and then it was time to fill it.It wasn’t very easy to get it filled up and keep it that way as it was the peak of the dry season, and there were doubts that the pond was leaking.
Questions about, weather to keep it filled, what plants to put in, whether to put in fish or not and weather a re-plastering was needed, were heating up. 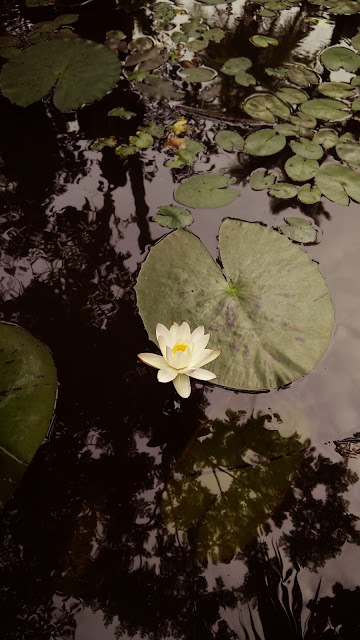 Well, all this kept happening and one evening the pond was filled. Some fish were put in and from one of the walks the children brought a lily plant. The fish thrived but the lily was struggling. Soon there was no sign of the lily plant. It wasn’t there anymore.
Mostly, after this, the pond has been alone, except for getting filled up occasionally during the dry season. We were all, of course, continue to be fascinated with the pond, spotting a snake, testing the boats.
After some months a lily leaf appeared again.
The plant reappeared and and last week we had the first lily flowering. It stood there, in the middle of the pond holding all in awe. One of its admirers, a dog, who happened to go too close to it, ended up slipping taking it down with him. A day later the lily was back up, gently swaying in the wind, saying hello to everyone.
Garden, nature, pond, walks