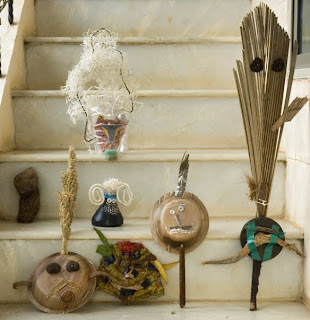 The theatre workshop planned for Kiri on Tuesday could not happen because Saraswati, who was going to conduct it was ill. So we planned a half-day mask-making workshop using collected junk and natural material, to be followed by a film screening for the children. Angie and I were going to conduct the activities for the day.

The mask making activity was something I had done in college and enjoyed tremendously, so I was very excited to do it with the kids, but of course there was no knowing how it would actually go! I started the day by showing the group photos of several different kinds of masks from different parts of the world and some junk art, just to get some juices flowing in the kids’ minds. They were quite enthralled and fascinated, and in hindsight it did feel like a useful presentation to have made. We then went out for a walk around school armed with plastic bags to collect interesting things from the roadside. Some of the children had chosen to pair up for the activity, others were happy doing it individually.

We got a few quizzical looks from onlookers and even a bit of a shouting from a watchman. The kids wanted to know why he was trying to shoo us off – it is interesting to observe how sometimes when someone doesn’t understand what’s going on, they sort of decide that it must be something improper, and try to stop it. I tried to explain to the kids that it was probably a very alien sight for the watchman to see a bunch of people scrounging around for things along the road (since we didn’t quite look like rag-pickers).

In under an hour we were back at school, reviewing our collections and starting to get them cleaned up. Siddhu preferred to let the mud be on his objects, while Anuj went and got a bowl of water with a rag to scrub his objects clean. Everyone’s ideas were evolving at different rates with very different trajectories, obviously, but most of the work was being done quite independently. Almost all the children were, for about an hour and a half, actively working at their projects, completely motivated and engrossed.

The materials we used ranged from plastic bottles, rubber discs and wire, to coconut husk, leaves, wood shavings and seed pods, to mention just a few. A variety of adhesives too were used – fevicol, glue-stick, cellotape, insulation tape, M-Seal.

I think the children felt happy with what they had done – and we had beautiful results! This is the sort of work in which the most interesting things happen when one allows the found objects – their form, colour, texture and physical behaviour – to shape and change the ideas. This back and forth process between conceptualising/imagining and attentively responding to the character of the material as it is being revealed, is for me the immensely alive core of such a process. And it is so much fun! Through such activities, I’d like to loosen the need to control one’s tools and materials (which seems to get built up so early in the child’s life), and to see if we can instead find an intelligent and alive way of moving and playing with the material.

The film watching plan was under a cloud because we had no electricity at school; the kids ran wild for some time while we tried to figure out what to do. Finally we showed them ‘Because of Winn-Dixie’ on the laptop and stopped halfway when the battery was about to run out and it was time to wind up. The whole group was completely engrossed while they watched – I believe that was a first among the films that have been screened at school (otherwise there have always been a few kids who weren’t interested)! We’ve promised we will show them the second half of the movie as soon as we can. None of the kids wanted to go home when it was time and we went through all kinds of negotiations (we even considered delaying the return and informing the parents but decided against it) before finally ending the day.