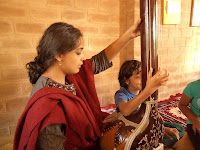 Pelva has brought music with her to Shibumi. We are very happy to have the regular singing sessions with Pelva where she takes us through the nuances of Dhrupad.

In the beginning I tried to understand the music. I couldn’t do this because I wasn’t able to pick out the different sounds and see that they were unique. To me they sounded pretty much like each other. I then tried to feel the music but I am afraid I didn’t feel anything. I tried keeping the beat while singing but this made me loose the tune and words. I also tried to move my hands with the music but they moved in a very odd manner which did not resemble the music in any way. So as you can see I found it very difficult to connect with the music both at the level of the mind and at deeper level. I will not give up and I shall continue to try and cross these hurdles because singing is one skill I sincerely wish to have. ~ Sagar. (Mammoth) 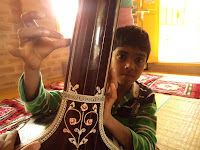 This type of music (Indian Classical) is generally very melodious but at times it can make your ear drums burst. The high upper ‘Sa’ is sometimes too difficult for my ear to handle. At other times when singing a certain melodious flow is felt and heard this is when I like it. Generally, singing these four days and the last time have been a new experience, not always the best but not the worst either. One thing I noticed was that the first day I sang with Pelva, there was some resistance in the singing. The next day there was still some dislike and resistance but by the last day it had almost gone. I sometimes find it boring when we do Sargam but while singing a song like ‘Tu hi’ I tend to enjoy more than otherwise. I also find that the sound of the Tanpura is nice. It is much better then the shruthi box. Also I think Pelva sings well. I don’t like it when you sing ‘Sa’ (Higher) or when anybody else sings it but otherwise the songs and your voice are nice. Thank you. ~ Dev. (Mammoth)
Till a few years back I did not like Indian classical music. I in fact hated it. The only songs I enjoyed were English ones which, now I feel, were noisy. Something changed all of a sudden, and I started listening to Indian classical music. The liking slowly increased and I started to listen to various numbers by various artists.
Although I used to go for singing classes my singing never got any better. Maybe if I had continued the classes it would have become better.
Now, I enjoy listening to Indian classical music to a great extent. I can now appreciate the skill behind singing. There are so many small little things which an amateur ear can not figure out which, apparently make a big difference. I do not enjoy singing much as I enjoy listening to Indian classical music.  (Name not written- pls find out- it’s the boy with specs) (Mammoth)
Firstly, I am generally not fond of singing this kind of music or it’s just that I haven’t had much experience with this kind of music. However I do like listening to Dhrupad music as it makes me very calm from inside. It just seems as if my heart has become quiet and has dropped all its worries somewhere behind.
What I have sort of found out is that Dhrupad music is actually a mythological story but has notes attached to it. I really like early morning Dhrupads as they have ‘komal’ notes which brings a different feel to the music.
Thank you for everything. 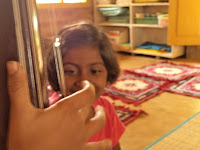