A Day With Kabir

(Thanks, Arati, for letting us use your post on Suno Sadho — http://sunosadho.blogspot.com/. Videos, images, and text in italics added by us.) 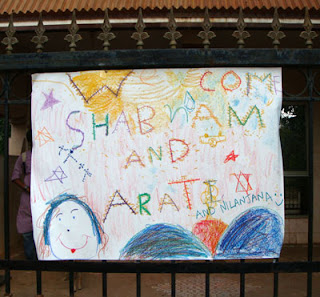 The day started unusually for me – with zero expectations. Shabnam and I were on our way to ‘Shibumi’ – a non-formal school conducted in a house on the outskirts of Bangalore city. About 35 children,and 7-8 dedicated teachers – who were themselves exploring boundaries of learning with stories, arts, songs, and lots of play. I looked forward to this day – a day of singing and sharing Kabir, with a vertical age group from 6 to 60, as playmates.

The singing began in a long open room – well lit, with walls of books, drawings, odds and ends. The little ones sat closest to us, clustered around – wide, bright eyes, open mouths, a wonder in their looks as they watched Shabnam sing with her head thrown back, eyes closed, a smile – expressing a little of the world she inhabited inside. The older, taller ones sat systematically further – yet all eyes were in focus, all bodies still. I watched this audience, that we were priviledged to have, in perfect oneness with Shabnam, her Kabir songs.

From the little ones, we got most attention with songs containing imageries of the external world – ants with anklets, roaming huge elephants, proud kings. They got restless with inner probings and were comfortable enough to lie down, or walk away -peek from the windows when curious. There was an ease, a ‘sahajata’ in this behaviour, that only children growing up in such open systems are able to retain and express.

The older ones were ‘stayed’ with us longer, with a deeper involvement with a questioning Kabir, shy, but responding to questions, in conversation, in Satsang.
This whole audience absolutely lit up when it was time to sing ‘ Mat Kar Maya Ko Ahamkar…’ – it was a song they had learnt with Nilanjana over many prior sessions – and now they sang it with energy, gusto, huge smiles – all sang!

Later in the day ‘Mat kar maya’ started spontaneously when some children were curious about the tambura. The melody reached every corner of the house, and children and adults came bounding towards Shabnam to join in! It was magical. This video combines both the more formal setting and the informal, extremely animated version!

The morning session ended with a ‘song learning’ – we chose ‘Bhav Nagari’, a personal favorite amongst many many favored.

After a brief break with Khaman Dhokla and watermelon (yummy) – we regathered with the older children from middle to high school for an interaction session. They had recently seen ‘ Had Anhad’ and this served as a point of deparature for exploring boundaries, from the Indo-Pak border featured in Shabnam’s documentary to social, relegious, caste and innumerable other borders that we build around ourselves to safeguard ourselves, our ego, the very notion of the individual ‘me’. Were these really children talking? When do we stop being such children? When each question, exploring – is just that – a question attempted with sincerity to want to know – figure out. I can imagine the same session being responded to very differently, defensively, in a world of ‘identity-fied’ adults.

Our last session culminated with a story and song – the brave parrot song ‘ He Mari Heli re – Kin sa karan main prem?’Hugely popular with young and old alike – this is a song about the courage and compassion of a little parrot that would not abandon its tree during a forest fire.

The children then broke into several groups to pictorially represent this story in four segments to produce canvas scrolls, while one group decided to do a theatrical interpretation of the story’s essence. After excited deliberations within groups, the children worked in quiet while some of us gathered in a corner to sing songs of Kabir. 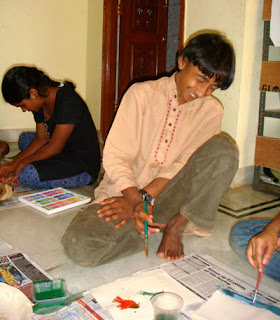 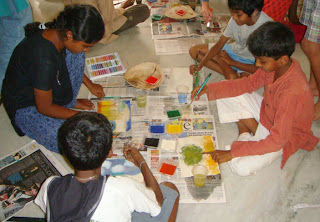 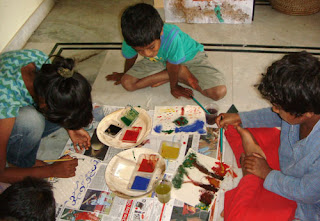 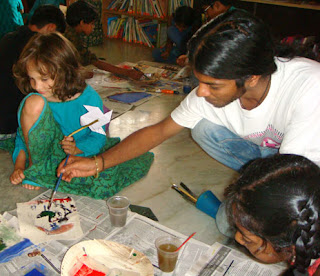 The art works that emerged from this quiet time touched us – as only clear honest expressions can. 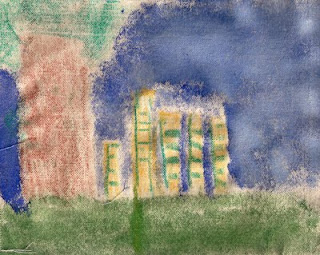 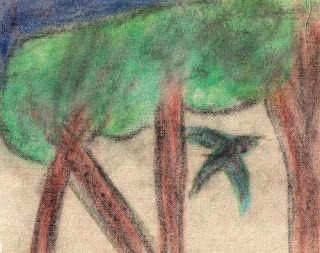 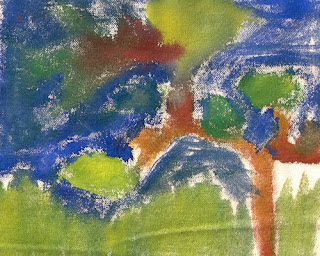 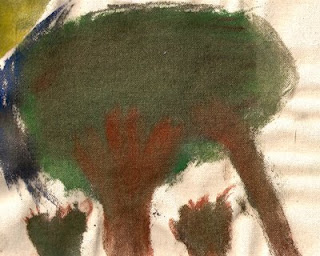 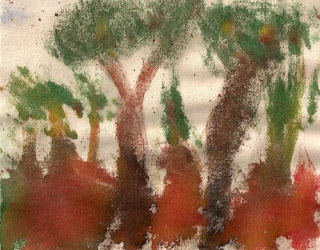 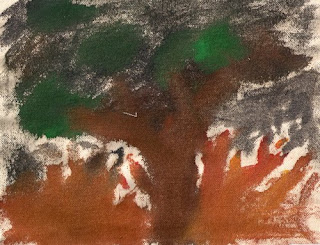 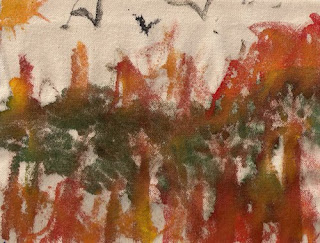 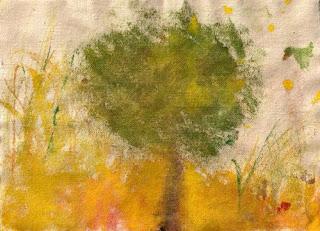 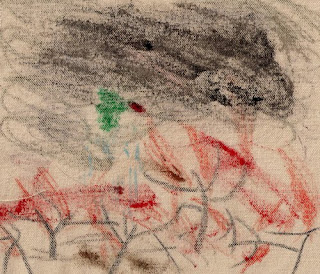 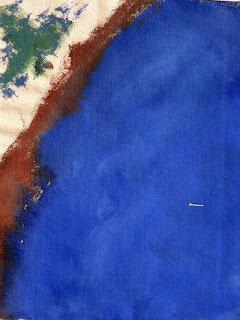 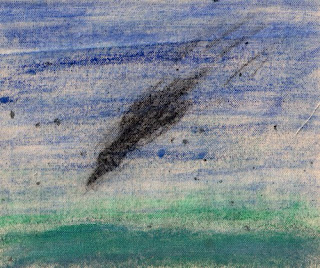 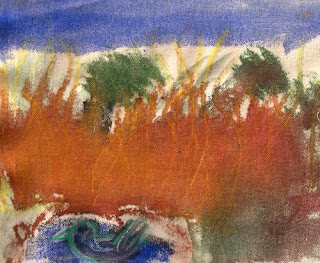 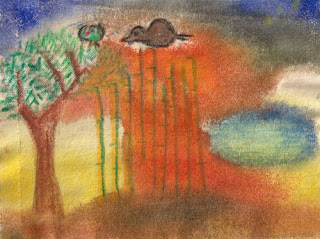 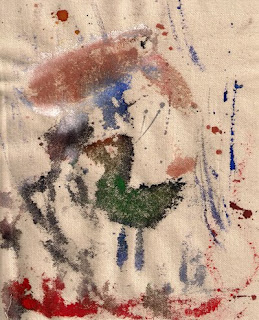 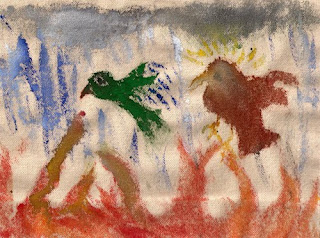 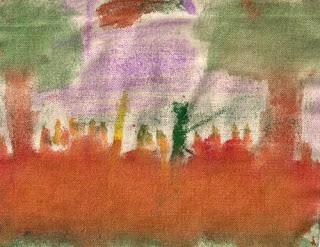 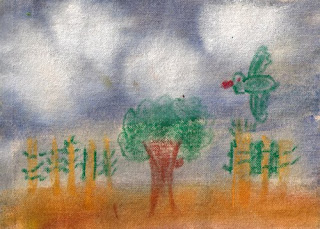 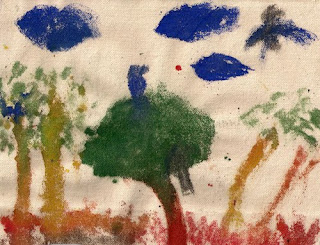 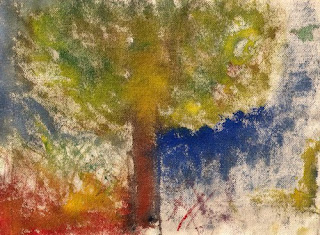 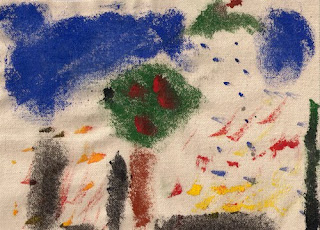 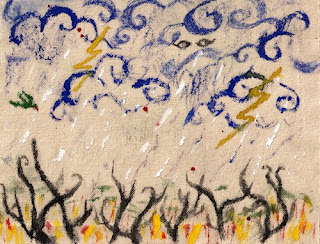 In between, we heard one complaint that everyone in the theatre group was fighting for parts — everyone wanted to be the parrot! They then dropped the parrot idea completely, and put up their own rather delightful interpretation of the song. I think through the different activities in the day, perhaps every child found something to engage in seriously. For that reason, and because so many unplanned moments of interaction come about through the day, it is nice to have a long, flexibly planned time, rather than a short, tight programme.

This day had become a gift for me – to open, unfold and savor – moment by moment – lingering, unwilling to depart.
Music, Visitors, Workshops